Using AROMATHERAPY to Balance the Chakras 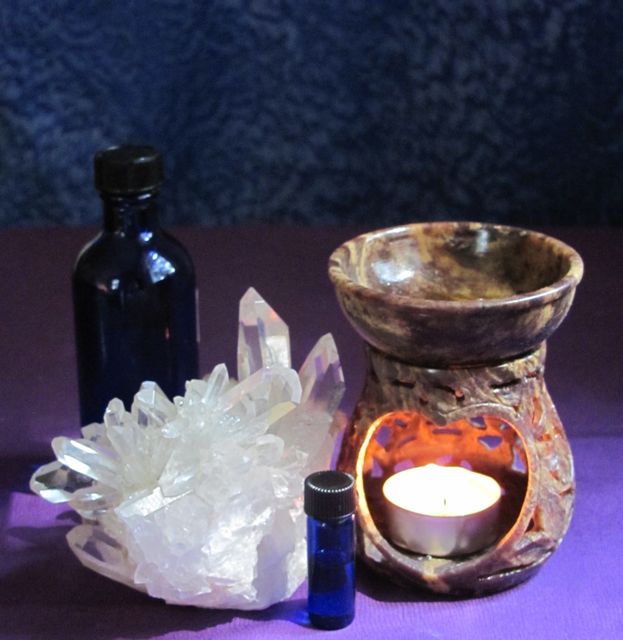 Chart of Essential Oils for the Chakras

These are my favorite oils for each of the seven chakras.

The following excerpts were taken from Vibrational Healing through the Chakras with Light, Color, Sound, Crystals and Aromatherapy by Joy Gardner.

“Fragrant oil brings joy to the heart and a friend’s support is as pleasant as perfume.” —Proverbs 27:9

Emotional release. Human beings give off pheromones and other chemicals when fearful and under stress. To cleanse the air when emotions are high, spray with a combination of angelica and lavender. This is also a good combination to use after emotional release work, or when you come into a room when the energy does not feel clean.

Auric healing. Harry Oldfield, an early British pioneer in Kirlian diagnosis, and a recipient of diplomas in homeopathy, biology and physics, developed a method of viewing the human energy field called Polycontrast Interface Photography (PIP). Through these photos one can witness essential oils being placed in the palm of a person’s hand as the auric field gets brighter and wider than the fields of control subjects in which no oils are used. Presumably, when the aura is brighter and wider, the chakras are more open and the energy flows more freely through the body, mind and spirit.

Correlating the Oils with the Chakras

The following oils have been arranged according to the chakras where I most commonly use them. These are just guidelines.

First Chakra. Aromas which have aphrodisiac properties are associated with the first and second chakras. For the first, I list the musky animalistic odors (which are not enjoyed by all) and for the second, the more subtle ones. Also for the first chakra I use aromas that give a sense of grounding and connecting with the earth.
Patchouli is a thick dark yellowish-brown oil with a greenish tinge. Patchouli is musty and pungent and—for those who like its distinctive odor—it has an aphrodisiac affect. It can be used as a perfume, though you may want to dilute it with up to 10 parts jojoba or almond or vegetable oil. It is a stimulant and anti-depressant that is commonly used in China, Japan and Malaysia. It is useful for cracked skin and heels and athlete’s foot (the feet are also associated with the first chakra). Geranium and particularly
Rose Geranium is light green and vaguely resembles the odor of rose oil. It can be used as a perfume, placing a few drops behind the ears. It stimulates the adrenal cortex, which governs the balance of hormones, including male and female sex hormones. It is helpful for pre-menstrual tension and menopause. It is also used for fluid retention, which often occurs premenstrually.

Second Chakra. The aromatic oils for the first and second chakras are fairly interchangeable. If you want an aphrodisiac, be sure the aroma is pleasing to both parties. Jasmine is a dark, viscous oil with a heavy, almost animalistic quality. The white flowers must be gathered at night, when the aroma is strongest. High quality oil is very expensive, but only a tiny amount is needed and can be mixed with a carrier base such as jojoba. Or it can simply be inhaled. Massage on the abdomen and lower back during childbirth to relieve pain and strengthen contractions. It is also used for post-natal depression.
Jasmine strengthens the male sex organs and may help reduce an enlarged prostate. Its aphrodisiac properties may be helpful with both impotence and frigidity. Sandalwood is a small evergreen parasitic tree that grows in India, Australia and Hawaii. The oil is yellowish to deep brown and is extremely thick and viscous. It is a powerful antiseptic, used to treat infections of the urinary tract and gonorrhea. Used for oily skin and acne as well as dry skin, it is excellent in after-shave lotions for barber’s itch (the cheeks correspond to the second chakra). It is also an effective aphrodisiac
Neroli is a thick, deep brown oil derived from the flowers of orange trees. The bitter sweet scent is best diluted in a carrier base. It is antidepressant, antiseptic, antispasmodic and aphrodisiac. It is a gentle sedative, alleviating states of anxiety, including those associated with sexual performance, stage fright, and taking exams. Helps promote sleep when put in a bath before bedtime. Stimulates growth of new skin cells, so it is useful to prevent or get rid of scar tissue. Good for dry and sensitive skin. Used for spasm of the smooth muscle, so rub it into the abdomen for diarrhea.

Third Chakra. The digestive organs, nerves and the mind are associated with the third chakra. These aromatic oils are excellent for calming the nerves, soothing the digestion and stimulating the mind.
Peppermint is used as an aromatic oil in candy and various medications, this herb is famous for settling the stomach and freshening the breath. The throat corresponds to the third chakra. Peppermint has a beneficial effect on the stomach, liver and intestines. You can massage the stomach with peppermint oil with an equal amount of a carrier base as an antispasmodic for colic, indigestion, vomiting and stomach flu. It is also excellent for headaches when rubbed into the temples.
Roman Chamomile is a fine oil is produced from this yellow flower. It is soothing, calming and anti-inflammatory. Add a few drops to massage oil or use as a compress for internal inflammatory conditions such as colitis, gastritis and chronic diarrhea. Add a few drops to a warm bath to alleviate stress or tension.
Lemon oil relieves anxiety and depression and combats fatigue and lack of energy. Add a few drops to warm massage oil and apply to the back in light, gentle strokes. Use in a diffuser for stimulating the memory and for mental alertness. To relieve vomiting, put a couple drops on a tissue and inhale. For diarrhea, put a few drops in massage oil and gently massage the lower abdomen and lower back, then inhale from the hands with several slow deep breaths. Also excellent for removing unpleasant odors, freshening the air and bringing out the color in wood.

Fourth chakra. These oils are good for the heart and lungs.
Ylang ylang (pronounced E-Lang). Some of the flowers of this small tropical tree are pink, and some are mauve or yellow. The oil varies from almost colorless to a pale yellow and the aroma is extremely heavy and sweet. It is used to slow down over-rapid breathing (hyperpnea) and over-rapid heartbeat (tachycardia), and helps alleviate conditions of shock, anger and high blood pressure. It is antidepressant, sedative, and aphrodisiac, as it helps to reduce the anxiety associated with sexual performance. It helps to balance the male and female energies. Too much can cause nausea and/or headache.
Rose oil is not distilled, but is produced by enfleurage, which requires a huge quantity of rose petals. Consequently, the cost is very high, but only a tiny amount is needed. This deep reddish brown or greenish-orange essential oil is a gentle but potent antidepressant and is especially comforting for those who are grieving. The Romans used to scatter rose-petals on the bridal bed because of its aphrodisiac properties. Rosewater has similar uses and, since it is produced by distillation, it is far less expensive.

Fifth chakra. These oils either have blue flowers or relate to the ears (the part of the head that relates to the fifth chakra).
German (Blue) Chamomile oil is produced from a daisy-like yellow and white flower. The soothing, calming, and anti-inflammatory properties of German chamomile are due to azulene, the active principle. When the oil is highly distilled, the azulene causes the oil to turn blue. This oil is beneficial for reddened skin conditions. Add a few drops to a warm bath to alleviate stress or tension. It is soothing, calming, and anti-depressant. For calming babies, add a few drops to massage oil or use drops diluted in oil for the bath. For earache, rub around the ear, or apply hot compresses of chamomile. Since the chamomile flower is yellow, this oil is also good for the third chakra. Caution: this oil can stain clothing. Take a moment to rub it into the skin.
Eucalyptus oil is used for cooling the body. It helps reduce fevers. During hot days, eucalyptus trees seem to give off a blue haze. Eucalyptus oil may be used in a hot or cold vaporizer to ease a tight, dry cough. Use in gargles. It is anti-inflammatory. Add a few drops to massage oil to relieve muscular aches and pains. It can be found in most drugstores. Though the quality of the oil in drugstores is not high, this oil is so potent that even less expensive oils can be used with good results.

Sixth Chakra. These oils relate to the mind, the head and the nervous system.
Rosemary oil is derived from a pine-like evergreen that helps to balance body and mind. It was used by the ancient Egyptians, Greeks and Romans, as a symbol of love and friendship because it clears the mind, stimulates the memory, and is good for the heart. Rosemary oil relieves headaches, migraines, and fatigue. It was used in funeral wakes and at burial grounds because it purifies the air and prevents infections. It makes the hair shiny and eliminates dandruff when used in a rinse.
Juniper oil is made from the ripe purple berries of the juniper bush. Juniper oil helps overcome anxiety, insomnia, and mental fatigue. It is good for greasy hair and dandruff. It strengthens the kidneys and relieves fluid retention.

Seventh Chakra. These oils are also good for the head and nerves, and they help to create a spiritual atmosphere.
Lavender oil is recommended for all ailments of the head, brain, and nerves. Several drops may be added safely to the bath water or to massage oil or used directly on the skin as perfume. Small quantities can calm spasms of the solar plexus. It is also excellent for insomnia, infections, allergies, fainting, headaches, migraines, influenza, insomnia, hysteria and tension.
Frankincense. oil comes from a resin with a somewhat camphorous penetrating aroma, that is used in swinging incense burners in the Catholic church rituals. This practice dates back to ancient times when it was called Holy Oil and was used by the Hebrews and Egyptians to drive out evil spirits. The name derives from Medieval French, meaning “Real Incense,” since it was the first kind of incense to be used. It has the ability to slow and deepen the breath, which contributes to feelings of calmness, which in turn is conducive to meditation. Frankincense is used in inhalations, massage, and bath oils for respiratory infections, chronic bronchitis, asthma, and for those who have had strokes. Steam inhalation is not recommended for asthmatics. Frankincense helps those who tend to dwell too much on their past.