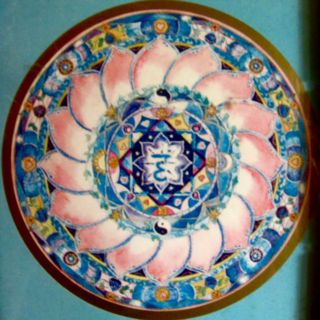 Mystics of many cultures describe the chakras as being energy centers along the spine. Some describe them as having the shape of trumpet flowers, extending up into the heavens on long stems. These ‘flowers’ funnel energy down into the person’s energy field or aura. If we visualize one of the seven colors of the rainbow at each flower, we can imagine these colors flowing into the chakras, feeding the aura with a rainbow of lights. When all the chakras are fully open, and the person is able to absorb all those colors, they would eventually merge, manifesting as a halo of white light at the crown.

Crystals and Aromatherapy
Balancing the Chakras

The following excerpts are taken from Vibrational Healing Through the Chakras with Light, Color, Sound, Crystals and Aromatherapy and from Pocket Guide to the Chakras by Joy Gardner.

According to the ancient teachings, as our consciousness evolves it follows a predictable path. This can be anticipated by understanding how energy moves up the spine through the chakras. Chakra means wheel or vortex. There are seven major chakras along the spine. Each is a vortex of spinning energy. When a chakra is relatively open, the rate of spin is healthy and the chakra is charged with energy. When a chakra is relatively closed, it doesn’t have much energy moving through it.

When there is serious physical, emotional or spiritual imbalance, specific chakras will be less open and the corresponding colors may be impure, blotchy, muddy, or entirely missing from the area of those chakras and from the aura, and this condition will eventually lead to physical illness.

There are many different chakra systems. In the system I use, there are seven major chakras. Through the chakras, we are able to receive and transmit emotional, social, sexual and spiritual energy. The three chakras that govern the area of the torso below the chest are called the lower chakras. The heart chakra relates to the heart and lungs. The top three chakras govern the areas above the chest and are called the higher chakras.

The first chakra concerns your connection with the earth, your birthplace, your culture, your foundations. The first chakra is influenced by your earliest relationships. If there was one person who gave you unconditional love, you are likely to have a strong first chakra, and your survival mechanism will be good. If you did not receive unconditional love, your first chakra will probably be weak.
This is the center of physical energy and vitality. It is grounded in material reality, so this is the center of manifestation. When you are trying to make things happen in the material world, in business or material possessions, the energy to succeed will come from the first chakra.

The second chakra is about sexuality, sociability, friendliness and desire. The second chakra governs your sense of self-worth, your confidence, and your ability to relate to others in an open and friendly way. It is influenced by how emotions were expressed or repressed in your family during your childhood.

The second chakra is the center of the emotions and it is in the area of the large intestines.  When you feel emotionally unbalanced, you may experience diarrhea or constipation.
This is the center of gut-level intuition. It is a basic visceral feeling. “I just knew it was going to rain,” or “I had a feeling you were going to call,” are statements that typify  second chakra intuition. (There is another kind of higher intuition that is found at the sixth chakra.)

The second chakra is the sexual center particularly for women, because the uterus, fallopian tubes, and ovaries are located there. This may be one reason why women tend to be more emotional about sexual relations. When the second chakra is fully open, a person has a healthy sex life or at least a healthy attitude toward sex.
Fill your sexual organs with radiant acceptance. Feel your sexual desires finding union with your spiritual desires.Herein lies the Mystery of Mysteries. Desire itself is the Divine Motivator. Sexual energy is required to fire all other energy .The orange energy gives you the ability to reach out, to radiate, to extend yourself. It gives you the forcefulness to reach up—to your heart, and to your soul. Regard your sexual center as a precious fountainhead of vital energy. Explore that energy, learn to channel it, and eventually you will learn to use it as a part of your Total Self, to achieve whatever goal you seek.

(For more information, please see Vibrational Healing Through the Chakras with Light, Color, Sound, Crystals and Aromatherapy and from Pocket Guide to the Chakras by Joy Gardner.)