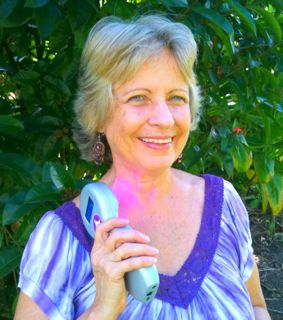 I want you to know about my Scalar Wave Laser. It’s a healing device like nothing I’ve ever experienced. I use this light machine every day. If you are serious about getting healthy and helping other people to achieve wellness, you owe it to yourself to learn more about this technology.

I’ve been using lasers for ten years now. This is my third laser, and I just love it! This hand-held cold laser is a fabulous tool that has been approved by the FDA for pain relief, reduction of inflammation, increased circulation, relief from arthritis and tissue relaxation.

Let me introduce you to Kalon Prensky. He’s a laser specialist, and he got into this line of work because he had chronic pain after an automobile accident. When he discovered lasers, it changed his life.  Since then, he’s been able to help himself, and thousands of others. 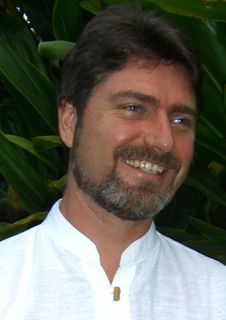 Ten years ago Kalon introduced me to lasers. I had a serious knee problem, because of an injury to the meniscus. Normally this is only treated by surgery. The inside of my knee was sore, and I couldn’t take long walks and I couldn’t dance (two of my favorite activities). Instead of getting better, it was getting worse, and I had begun to use a cane. I went to visit Kalon, and he said, “You’ve got to try this laser. I know it will help you with your knee.”

In just three treatments, my knee was as good as new. I was able to take long walks, and even to dance! The problem never came back. So I was sold on lasers. I got one, and I couldn’t believe how helpful it was. I found myself using it all the time, for myself and my clients. Now I can’t imagine life without one. Even if I only used it for pain relief, there are endless examples of how I have used it to heal a vast array of different kinds of pains.

Thank goodness I had my laser with me on my last airplane flight. I was taking three different planes. During the first flight, as the plane was descending, the pain behind my ears at my mastoid bone was excruciating. After the flight, I pulled the laser out of my carry-on bag, and used it over and behind my ears. On the next flight, I had no pain. On the third flight, I used the laser about a half hour before we were due to land.

The woman sitting next to me had a sweet little baby boy, and we had been playing together. As the plane began to descend, the little boy began to cry, and his mother explained that sometimes his ears hurt him. I asked if I could hold the laser up to his ear, and when I did, he stopped crying, and he was content for the rest of the landing, as his mother gratefully kept the laser at his ear. It felt so good to be able to stop his painful crying. And I, too, was pain free.

I personally have seen the cold laser work for a broad variety of ailments including arthritis, sciatica (inflammation of the largest nerve in the body that runs down the leg), back and shoulder pain (it relaxes the tissue). Severe wounds and violent itching cleared up in just a few treatments (excellent for inflammation). People who had chronic pain syndrome for many years found pain relief for the first time in years. I’ve seen it used effectively for mouth sores and sore throats (again, it is excellent for inflammation). I’ve seen it give relief from ovarian pain and bladder infections (inflammation). I’ve used it for muscular pains and I’ve seen it clear up a dental abscess (inflammation) in just two treatments.

I have used various types and sizes of hand held lasers. Some plug into an outlet. The portable kind runs on a battery. Some lasers come equipped with probes for treating acupuncture points or for using in the mouth and other cavities. You select one of several programs, which vary according to Hertz frequency and time duration. Higher frequencies give off rapid shallow wavelengths that are suitable for treating the skin. Lower frequencies give off slower deeper wavelengths that are good for treating muscles and bones. A treatment in any one area usually lasts for 3-10 minutes. The light is emitted from the “receiver” (that looks like a phone) or from the device itself, and is held directly over the skin. It can pass through clothing, but it’s preferable not to wear dark clothing.

I feel quite certain that within five or ten years, lasers will be as popular as computers, and all clinics, hospitals and dental offices and most homes will have at least one hand held laser. It is a highly effective, noninvasive, nontoxic and relatively harmless method for healing a wide variety of ailments.

The best cold lasers combine infrared and red laser diodes for maximum healing potential. The SCALAR WAVE LASER combines these two wave lengths with a third, violet, wave length. Contrary to color light therapy, the light emitted by the red laser diode, coupled with the laser light and infrared light, does not have any of the irritating or inflammatory effects that red light alone can produce.

Paul and Lilly Weisbart  produced an innovative laser that has violet LEDs in addition to the infrared and true red laser diodes. Since violet contains both blue and red, this laser has amazing properties. According to Color Therapy, violet light can stimulate, and it can relax (just like the peppermint plant, which has a purple flower, has the ability to both relax and to energize, according to what is needed). This laser is called a SCALAR WAVE LASER. In addition to the main device, which contains 20 violet diodes, it comes with three pointers or probes, in red, infrared and violet, that focus the light much more intensely (100 mW instead of 5 mW diodes) into a smaller area that can be used like an acupuncture device, and requires a shorter time per treatment (as little as one minute).

In fact the laser is very popular among dentists. It is used instead of acupuncture for smoking cessation. In some cases it can help with impotence. It is also popular with veterinarians. The use of lasers is extremely simple, and anyone can learn in just a few minutes. When you order from Kalon at discoverlasers.com, you can also receive both of the excellent books that he has written on how to use the cold laser.  Of course the laser can be used with greater skill by a trained technician. 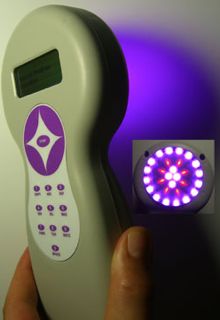 There are 3 pulsar probes

A low level laser is a simple device that looks like an old telephone, but instead of talking into a round circular area, a light comes out of that area. Some emit infrared light and some just emit red light. Some also contain true laser diodes that emit coherent laser light. The SCALAR WAVE LASER contains all three kinds of light.

Most lasers come equipped with a timer. You can put the light over any area that is tense or painful, and hold it over that area for 3 or 4 minutes, until it makes a little buzzing sound. Then you can move it to another place. You only needed to use it once a day. You can use it on as many places as you want to, though it is probably most effective to limit your use to 30 minutes per day.

Ideally, you begin a treatment by using the laser at the adrenal glands. By relaxing the adrenals, this helps the body to calm down and allow in the healing. It’s also extremely helpful in preparation for entering meditation, or for falling asleep, because it relaxes the tissue. In addition to having a relatively large diameter light that allows you to treat a larger area of the body, it is the perfect shape, with nice rounded edges, so it’s very comfortable to use. It’s also completely portable, and one overnight charge lasts for hours.

The five areas that are used at the beginning of a treatment (this can be done from the front or the back of the body) are: 1 & 2 – the adrenal glands – located above the kidneys, about a fist’s width above the waist, and about a fist’s width distance from the spine, on either side. 3 – the tailbone, at the bottom of the spine 4 – the hypothalamus, at the base of the skull (from the front, you could treat the center of the forehead, but be sure to close your eyes) 5 – the thymus gland (which produces white blood cells) above the heart. The laser is so powerful, and yet so safe. Other lasers require sunglasses to protect the eyes from the laser light, but THE SCALER WAVE LASER is frosted, so that the light is harmless to the eyes. The main precaution is that you do not use it over a pacemaker. When people use this combination of points, they report feeling deeply relaxed, probably due to reduced inflammation, improved circulation, pain relief and relaxation of the nerve tissues along the spine.

Scalar Wave Lasers can be used with or without the Pulsar Probes, however the probes are excellent for treating acupuncture points quickly and effectively. The unique Pulsar Lasers come in red, infrared and violet wavelengths. If you’d like more information about the SCALAR WAVE LASER, please call Kalon at 808 870-0348 or write to him at

Be sure to tell him I sent you, and he will give you a special discount and/or bonus. You can also call me at 808 345-5838 if you’d like to speak to me about the laser.  Be sure to check out the awesome testimonials here.