Smoky Quartz Pulls Negative Energy Out of the Body 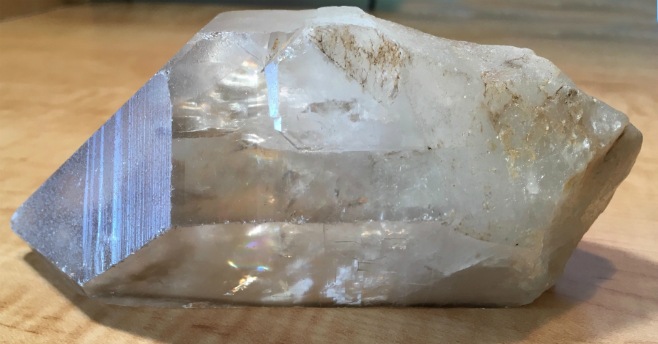 I was doing a talk at a metaphysical bookstore when a woman named Abigail volunteered for a demonstration of crystal healing. She had serious pain in her left hip and was considering hip replacement surgery.

When I see a client, I usually start by doing Joy Gardner’s Chakra Diagnosis and Vibrational Alignment, where I feel the spin of energy at each of the seven chakras and six of the sub chakras and then place crystals and use essential oils to break up emotional and physical blockages, to restore the free flow of energy.

The beauty of this system is that it gives you a thorough reading on a person’s physical and sexual nature (the bottom two chakras) and their emotional nature (the middle chakras) and their spiritual and mental natures (the top three chakras). Each of the chakras and subchakras relate to a different aspect of your body, mind and spirit. For example, the subchakras at the feet reflect whether you are walking your own path in life. The hips hold the energy of your mother (left side) and father (right side) during the first three years of your life. When I feel the spin of energy at the left hip, I think to myself, “How does this woman (in this case, Abigail’s mother) feel about being a mother? How does she feel about having a baby? How does she feel about herself? How does she feel about her husband?” All kinds of information get stored in the left hip.

In Abigail’s case, her mother felt preoccupied and uninterested in the task of motherhood. I reluctantly said this aloud, and Abby immediately nodded her head and rolled her eyes. “That’s right! I’m sure she resented me, right from the beginning. We never got along! And now she’s 85, and she just moved in with me, and she’s still mean to me!”

I led Abigail through a one-minute Anger Release Visualization. She enjoyed that. Then I placed a large brown smoky quartz crystal at her left hip. This crystal has a single-termination, which means that it has a point, like an arrow, that gives a clear direction to the energy. I placed the point toward her feet, with the intention of directing the angry energy out of her hip, down her leg and into the ground. I also did some toning (vocal sounds), to amplify the movement of energy out of her body.

I rarely see energy, but I feel it with my hands, and most of my students can learn to do this. As it happened, two of the people in the audience had the gift of being able to see energy (they were clairvoyant) and after the demonstration, each of them came up independently and they were both so excited as they described the energy being pulled out of Angela’s left hip, down her leg and out her foot.

When Abigail got up off the table, she was able to walk without pain. She contacted me on Facebook a year later and told me that the pain never came back. She said she continued to use the Emotional Release Visualization whenever she felt frustrated with her Mom, and she purchased smoky quartz crystals for both herself and her mother.

I will be demonstrating the Anger Release Method during my free 7-day Telesummit, the Power of the Heart, which you can read about here in a couple of days.  I believe that being able to acknowledge and release the anger was a vital part of her healing.  After that, the combination of crystal and sound energy helped to move the stagnant energy out of her body.

Joy Gardner’s Vibrational Alignment and Chakra Diagnosis and the anger release method are just a few of the 22 modalities that I teach in the RMA Mystery School and the Vibrational Energy Coach Certification Program, which begins on September 24.

The Mission of the RMA Mystery School is to provide a sacred space for kindred spirits to develop their special gifts, to create fulfilling careers in energy healing, and to raise individual and planetary consciousness.